Hi. I’m Wood Reviewer, better know to my friends as “I don’t care, go away.”

For those of you unfamiliar with me, I play a game called ROBLOX. ROBLOX is a mix between a game engine and publishing platform, which contains many small games on it. These games are developed by developers, most of which genuinely care about their work, and others who make Garry’s Mod game mode clones. ROBLOX lacks many of the more advanced features of other game engines, such as Source and Unity, so developers are limited. In addition, a majority of the games are made up of blocks, or bricks, since the game originated as a Lego-like building games.  One thing it does have, however, is wooden textures for the blocks.

This is where I come in. The wood textures on ROBLOX are stupid; they naturally appear on bricks one way no mater how the brick is placed or rotated. This causes issues where the wood grain appears to be sideways, so instead of a 2×4 having the grain go with the wood, it goes against it. 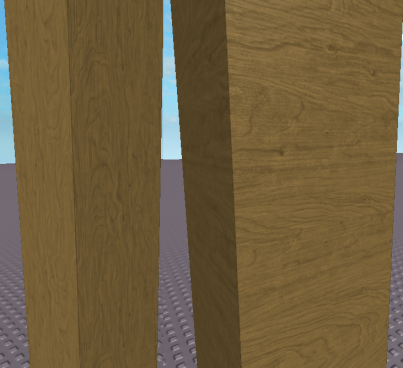 As you can see, this looks wrong, but for the most part no one on ROBLOX cares. People put hundreds of hours into games but don’t spend a few minutes fixing improperly rotated wood textures. This is where I come in. I look through places and point out these flaws. Most people usually don’t care, which is why I’m here. I’m not here to start a revolution, to change the world. I’m mostly here to annoy people so they fix wood textures in a game.

Now, I know what you’re thinking: Really, who the hell cares? Well nobody. That is the point. No one cares and I’m trying to make people care or annoy them enough so they fix it to not have to deal with me.

Anyways, I joined ROBLOX in 2008, I’ve been active on it for almost 8 years, and in that time I’ve gotten nearly 750,000 place visits. Not the most, but its something. I’m a member of the ROBLOX Developer forum, and had one of my games favorited by Shedletsky. I bring up Shedletsky because I was also a member of an old forum he ran called IronNoob. That was where I began my journey to help improve wood grain on ROBLOX. And by journey, I mostly mean annoying GollyGreg every few months about his wood grain being off and not doing anything else.

That changes now. It’s been 5 years since I began my journey to annoy GollyGreg, and it is now time to move on, to not just to annoy him, but to shame and annoy him and everyone else on ROBLOX who uses improper wood grain.