Hello there duck lovers, WoodReviewer here, and today I am looking at The Grumpy Duck by Ravenshield. Originally, today was suppose to be Part 3 of endorsed models, but decided to delay it because I made a post on it on Friday. My backup plan was Retail Tycoon, but I ran out of time for that. Next was the Titanic but it is not done, so that was scraped. Then was the recent Western Default Place templete that was added, but that was too close to what I was doing with endorsed models, so I spun the EBR Wheel of WoodShame and up popped the Grumpy Duck.

The first thing I did after I spawned was walk off the roof, because that is where you spawn, and went to the lowest point of the map. There I saw some bad wood grain on a piece of roof.

Next to in on a ledge was more bad wood grain. This time it was on a critical structural support and one piece of wood on a barrel. Surprisingly, most of the barrel was OK. It was just a single piece of it that had bad wood grain.

Next up inside the Duck was my good friend chair and table legs. They were being themselves, all wrong and stuff.

Going up stairs, there was this railing. From the front, it was correct. On the side, the wood grain was wrong. That seemed unfortunate; it really was nice from the front, just not the side.

It was then upstairs to the bedroom on a structurally weak ladder. 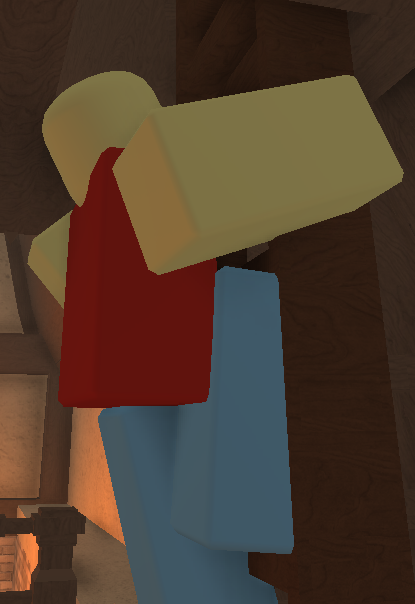 Lastly, onto the bed. Like the barrels, the closest vertical piece on the bed had bad wood grain, but the others were fine. Also, the end caps on top of the bed were off.

Overall, the wood grain was fairly poor. It is a small showcase that has no excuses for any bad wood grain. It got most of it correct, but that isn’t enough. Especially for an admin in EBR. However, it is proof that the EBR Wheel of WoodShame still works when I’m sort on time and need a quick blog post.