Hello readers old enough to remember when Prison Break was a relevant TV show, WoodReviewer here, today I am taking a look at the recently revived place, Prison Life by Aesthetical, now in the 2.0 version. This was on my short list of places to review this month, and with 2.0 being released and its massive surge in popularity today, why not do a review now. For those of you who are unfamiliar with Prison Life, it is a game where you live life as a prisoner until you escape, and then gather guns to return to the prison to brutally murder the innocent prison guards for either fun or to help others escape. Seems a bit dark when I say it like that, but most of the prison guards now are guests, so they don’t really have feelings. Especially this one.

Moving onto the actual game, there is not much to see. I chose to be a prisoner because, despite being a prisoner, the prison lets prisoners walk in and out so freely that even the creators of Hogan’s Heroes would agree it is silly. You start in a small jail cell like this. In it is a table, chair, bed, toilet, and a sink that is totally not a secret escape path. The issues here are with the chair and the table. First, it is the table and chair legs, because of course those are bad; the legs have horizontal wood grain instead of the correct vertical wood grain. This carries over to the back of the chair, which also have horizontal wood grain instead of vertical grain.

Moving through the prison is another table, again with bad wood grain on the table legs.

With the prison inspected, it was time to escape from it through the sink’s connections to the sewer, which is conveniently just large enough for a person to fit in. Odd.

Inside were some guns that you could use because the place is clearly based on America, where you can walk up to places and just take a gun. Again, table legs. Should have vertical wood grain instead of horizontal grain. In addition, the table top should have wood grain stretching from one side with legs to the other, or the same way the guns are facing, not perpendicular to the guns.

Heading back to the prison because that was where literally everyone in this world lives, I walked in the front gate, again literally despite being a criminal, and saw this room. It was closed off and there was no way in, but if the chairs are the same as the ones in the cell, they probably have bad wood grain.

The last spot for the day was inside the jail in the top secret guard security area. Again, you could literally walk around here as you pleased; the security was terrible. Anyway, here was one last piece of bad wood grain: yet another table. Although this time, the chairs were plastic, so they didn’t have bad wood grain. 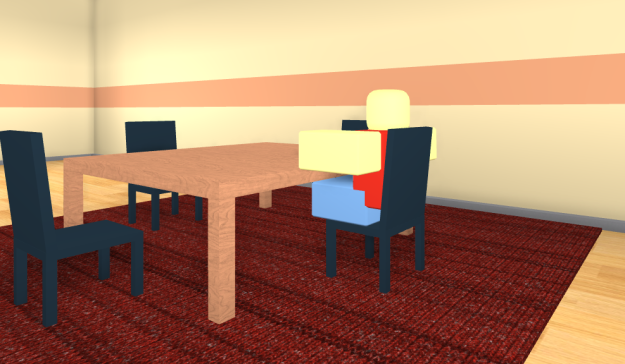