Hello quality physics lovers of ROBLOX, WoodReviewer here. Sorry for the recent stream of inactivity, I’ve been busy doing things that involve stuff that I cannot legally share. Not bad things, good things. I just can’t share them. But this blog isn’t dedicated to posting good things, it is dedicated to posting bad things. Or mainly bad wood grain. The jury is still out on if bad wood grain is actually a bad thing, but luckily this blog is also an authoritarian dictatorship so I don’t need to listen to the jury. Today I will be taking a look at CLUB NYONIC by NYONIC. 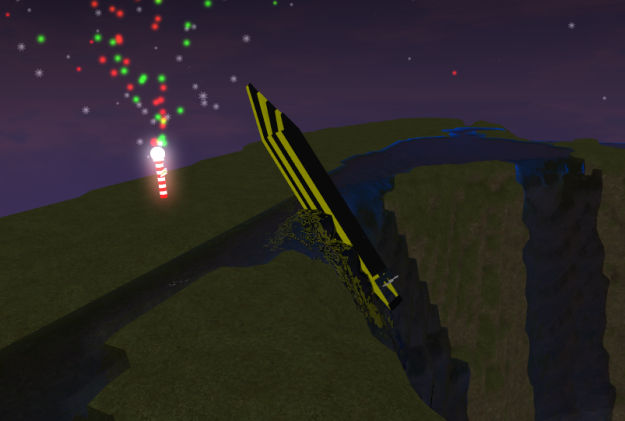 This is a continuation of the famous trend on ROBLOX for having clubs/resorts that are a bunch of random things scattered around the map without any real theme that have been pooping up on ROBLOX since WeirdoKing made the first popular resort back in 2008. On the resort side, more popular version was by SONICTHEHEDGEHOGXX. Despite being a club, CLUB NYONIC more resembles these resorts than the more popular real clubs like Iron Cafe by IronInforcer and Club Christy/Pop Club by Christina8787/FizzyPops. But enough of the history lesson; lets take a look at the wood grain. Lets start off at the main dock area. The main issue here was that the vertical post holding up the fish had improper wood grain on the side. The front face was correct, just the side was incorrect.

Continuing on through the and boardwalk area, this bench had improper wood grain everywhere. It is the type of asset you make as an example of what bad wood grain is. But behind the dock, the top face of the railing was also incorrect, again with the front face being correct.

Continuing along the shoreline, the next issue were the supports on the houses near the ocean. They had improper horizontal wood grain instead of the correct vertical wood grain.

Continuing along the houses, the bad wood grain continued. Much like the bench on the boardwalk, this picnic table had bad wood grain on nearly every part of it.

But the bad wood grain was not limited to just outdoor models and buildings. In the school, that exists because reasons, the legs on the bench and table both had improper wood grain.

Next up, in the church that also exists because reasons, the podium had improper wood grain, again here being horizontal instead of vertical.

Like bees? Want to be a beekeeper? Well, there are also bee nests you can take care of problably, I couldn’t figure out how to. But the legs for the bee nests were improper with horizontal wood grain rather than vertical.

Or did you ever want to ride a turkey wearing a top hat to a neon colored grocery store? Again, you can do that. But again, bad wood grain shows up on the support for the front of the store and neon bench at the store.

And that was most of the bad wood grain at CLUB NYONIC. There was more with some of the same assets, such as benches, scattered with bad wood grain, but the message is clear: the entire game was filled with bad wood grain. I’m aware it has been around for a while now, based on the fact the terrain appears to be as big as the old max terrain size limit that was removed 2-3 years ago, so it has had more than enough time to fix any improper wood grain. Even if it was just made this year, that is more than enough time to fix the wood grain. It should be fixed, because otherwise people might start to think the game is poorly made, and if the wood grain is correct, they are kind of right.