Ho ho ho, Merry Thanksgiving. WoodReviewer here, and today I am taking a look at a classic Thanksgiving Day game since, well, the last few years there haven’t been any real Thanksgiving Day games. Anyway, today I am looking at Turkey Hunt 2010: The Game by  Kuunan, NanuukoftheNorth, eumesmo92, and most importantly GollyGreg. Now some of you may wonder why I am complaining about a six year old game have improper wood grain. As I’ve mentioned a few times, GollyGreg caused me to create this account. I don’t want to say inspired because that may imply that his wood grain caused me to want to help others have equally good wood grain, but with the anniversary of my creation tomorrow and due to the fact this game is the only one Golly has ever actually finished, I felt like it was time to review it.

Now, some of you newer users may be put off by how small and seemingly basic this map is. And by today’s standards it is small and basic. By at the time it was fairly large and detailed. Look at the trees, for example. The trunks bend and the leaves have more than one single ball for the leaves. The roof was and doorway for the house were curved and made of more than one brick. It may hard to believe, but trust me this was high-quality level design back in 2010. Or atleast the non-wood related parts. Take this fencing, for example. The fence posts are improper, with horizontal wood grain instead of the correct vertical wood grain. And before anyone asks, yes, I looked back at old screenshots and this wood grain was improper even with the old wood texture. 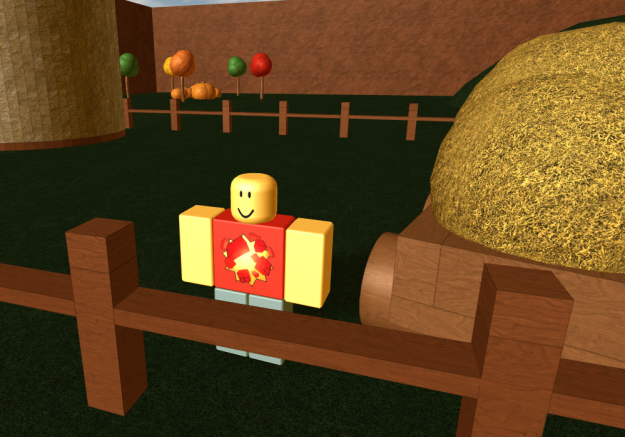 Near the silo in the background was a secret area. It is secret so I can’t say where it was. However, in the secret area was a ladder, and the vertical support for the ladder had improper wood grain. This was a major issue since the ladder was a good 30-40 studs tall.

Next up is another fence. The vertical posts here have the same issues as the above fence, only this time the top texture of the horizontal pieces have an improper texture on the top face.

The last part of the map was the central building. Again, the map was not very large. The building had several issues, with one of them being the fact the corner supports for the building all had improper wood grain. Same with the door way, which lacked the proper vertical grain. Although, surprisingly this only was on the purely vertical section. The archway above the door.

Next up was the elephant in the room, the floor for the building. Although the planks all went across the floor, from one side to the other, the grain went front to back. This is a major issue, and was so bad it even caused small part of the floor to collapse.

Overall, the wood grain was poor. But I already knew that, and have known that for six year. Still, I hope Golly does improve his wood grain eventually. Granted it has been seven years that I have been bugging him about this and he still show no signs of changes, but I have hope. And he has improper wood grain.