Whoa, hey guys, welcome to woodreviewerrbx.com. I am WoodReviewer. If you have been following my Twitter this week, you should be aware that I am currently taking a look at bad wood grain in some of ROBLOX’s endorsed models. For those of you who aren’t ware of what endorsed models are, they are the models you never use that always pop up when you initially open your tool box and go to “My Models.” That was suppose to go up now, but I am doing a bit more than just reviewing them and getting the blog out is taking more time than expected, so that will come out on Friday. Instead, I did what I always do when I need a last-minute review: Open up Epic Builders of ROBLOXia’s member list, click on a name, and look at one of their places. In this case, WhoBloxedWho was who I chose, and the only finished place on his profile was the EBR Build Server 3, Stratosphere Settlement. This is interesting, because instead of blaming one builder, can can blame the entire EBR member base for bad wood grain. Yay.

I will admit, it feels a bit cheap to go after showcases some times. Often, they were made before the current wood grain texture was added and some wood grain is off because of that. Other times it is because the creators moved on to other projects. Sometimes because it is just a minor detail. However, when I spawn into a place and the very first brick in front of me is wood and has bad wood grain, no bad feelings. And on even more houses. 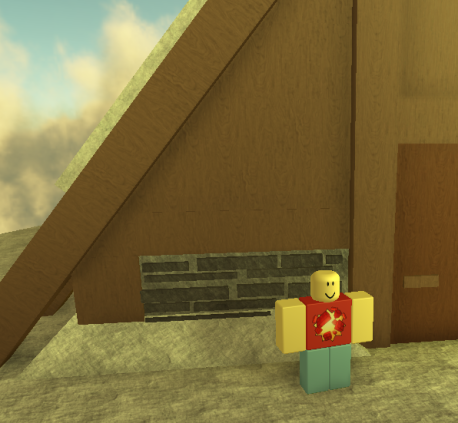 The wood grain was so bad it almost seems like it was purposely placed incorrectly, but even then it would not make sense. On this door, for example, the front of the top piece of trim was correct. However the bottom and both side support pieces had in correct wood grain. Same for the legs on the bed in the background.

Chairs and tables also had bad wood grain on their legs, in the way they always do.

Normally, I try and get a good selection of most of the exampled of bad wood grain. That just wasn’t possible in this case. Every building, every piece of furniture, and most of the decorations had bad wood grain. The assets were not even re-used either, they just had a bunch of assets with bad wood grain. I know it is a bit dated, but for a place created by EBR, supposedly the best builders on ROBLOX, the fact the wood grain is so bad is nothing but a disappointment.