Lets start out with this office by Rovien. The front has a bunch of wood grain,  but the main shutters are fine.

However, the lanterns above the entrance have issues, with the supports on the sides not having proper wood grain. That don’t have vertical or horizontal wood grain, but diagonal. This is similar to horizontal, however since it is a single union some of the cross sections in it have completely incorrect wood grain. 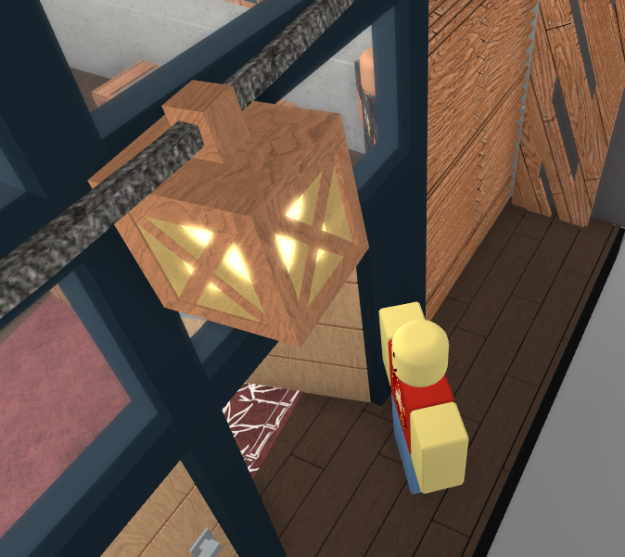 Inside, these shelves have incorrect wood grain. The grain should go from the back of the desk to the front on the top. However, there is something else I need to say: Those bricks look like regular bricks, are the size of regular bricks, and do nothing special. Please don’t add a mesh for bricks like this that do nothing. If you want a special size/effect/texture, fine, but there is no reason this desk, made of entirely rectangular bricks that are anchored with no special textures, need to have a brick mesh in them. 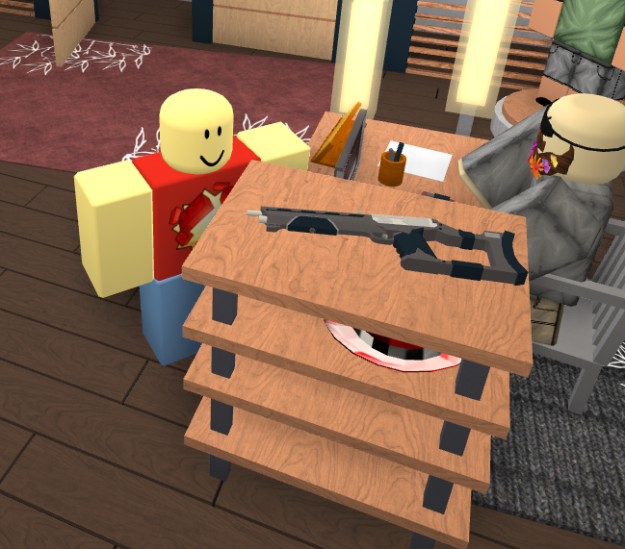 Next up is this TV screen and the little table at the bottom. The issue here is that the wood planks do not go the long way along the wood, so from the side of the TV to the other, and as a result are short and weak.

Last major issue with wood grain here is the ceiling. As you can see, some of the boards going across the ceiling do the grain does not stretch along them. The grain should always follow the longest direction that the wood faces.

There was more examples of bad wood grain here, but it is time to move onto other offices. Next up, Nightgaladeld’s office. 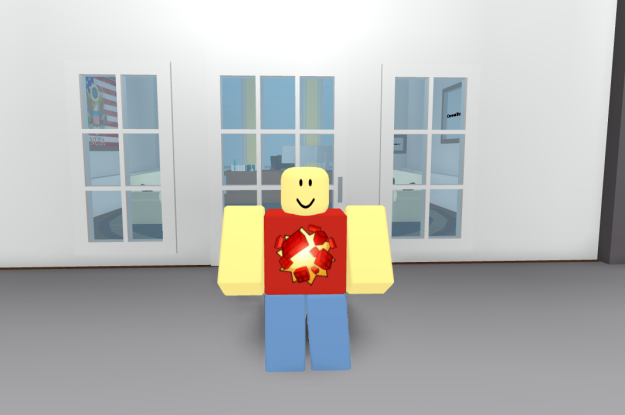 The major piece of wood grain here was the desk. It was odd. On one hand, by the rules of wood grain the boards were correct, but it looks off at the same time since there are no defined supports. In the end, it passes my test.

However, before you get too excited about passing, the frame on on this poaster and several others is incorrect, with the wood grain being horizontal rather than the correct vertical orientation for the sides of picture frames. 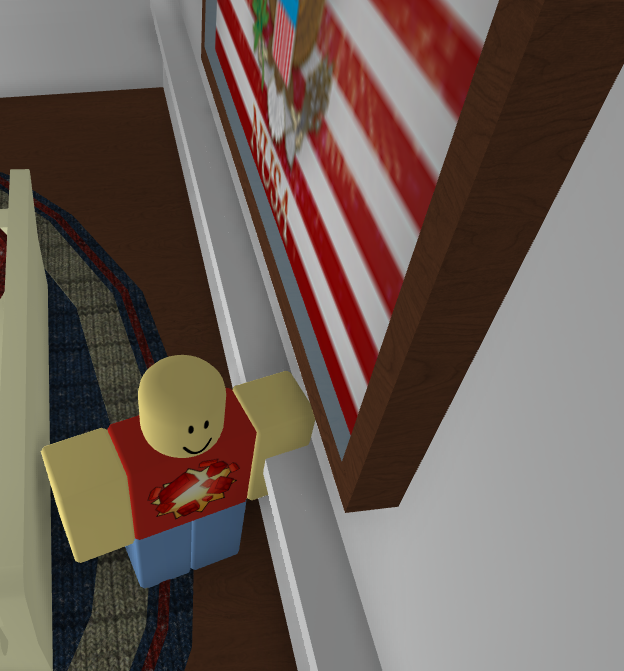 Moving on, the third office is by someone. I have no idea who made it, but there is no wood grain here so my work is done.

The fourth office I’m inspecting today was made by Mightty.

Not even through the door and you can see that the vertical supports on the doorless door frame have improper wood grain, with horizontal grain rather than the correct vertical grain.

Inside the most obvious example of improper wood grain was this ladder. The supports on the side with the steps and other side both have improper wood grain, with horizontal wood rather than vertical wood grain. As a result, both will easily snap when pressure is applied to them. 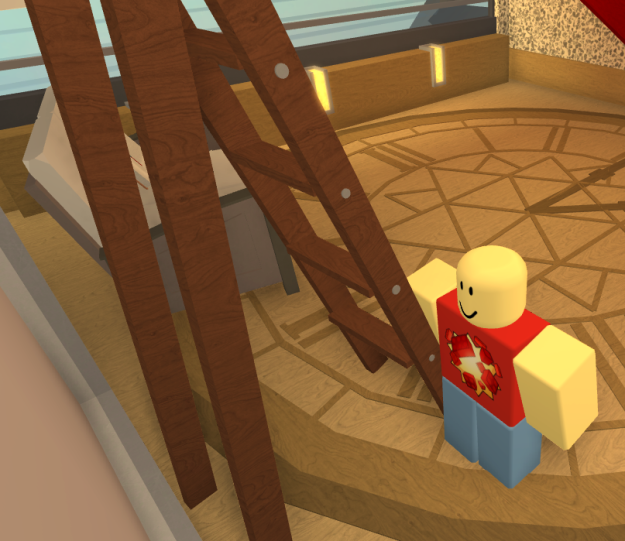 The last major issue here are the support beams around the office. Again, they should have vertical wood grain but they instead have horizontal wood grain. There are many other issues with wood grain here, including small issues with the pattern on the floor or the little models hanging up, but they are all due to the wood grain on the parts not going along the longest faces of the brick, and since I have two more offices to review there isn’t enough space to go over the same issues over and over again. 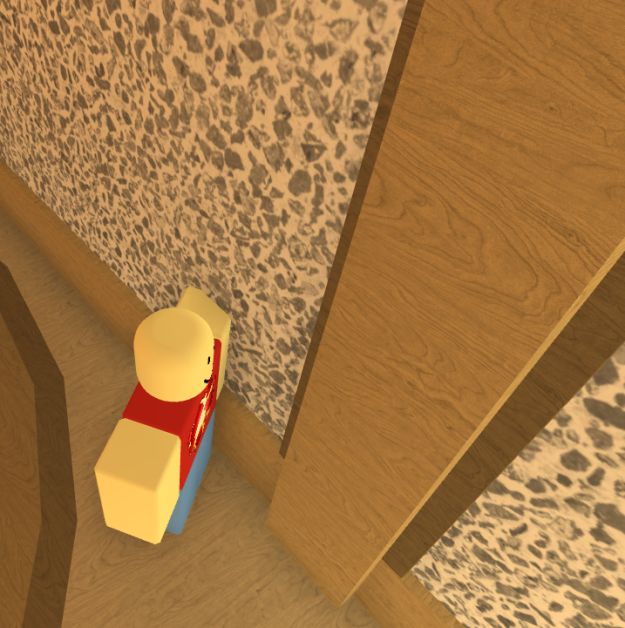 Next up is a look at a place that is suppose to be the Krusty Krab made by Kbrick, but for copyright reasons I can’t say for sure that it is the Krusty Krab. There are some issues with the outside. First, the door frame should have vertical wood grain. Not only is this me saying that because stacking 1x1x1 studs ontop of each other is weak, but because that is how it looks in the TV show. Next, the large curves on the outside should have wood grain starting from the base and curving around the roof. Again, this is not just because of how wood grain should look in-game, but because that is how it looks on the show.

The final office for today was made by Dev_Anthony. One major issue from the outside is that the large wooden panels do not have proper wood grain, so even though they are taller then they are side, the grain is not vertical but rather horizontal.

That was another six RBX Dev offices, and unlike the previous ones all out of the six five have improper wood grain, with one not having any. This a regression from my previous posts where two offices each lacked any wood grain. Maybe next time there will be better wood grain, since in all honesty it can’t get any worse than this.