Hello there terrain builders of ROBLOX, WoodReviewer here, today I am going to be going over several ways to get rid of texture clipping when building terrain and roads, mainly with regards to C-Framed, non-brick terrain. So basically where the terrain is made of rotated bricks. So this is hard to explain, so here is a pond that I am using to demonstrate different techniques on.

As you can see, there is a bunch of texture clipping around the pond. Many people have this issue with building, although the use of wedge terrain and improvements to smooth terrain have made it less frequent, but still fairly common. How do you fix it? Well, let’s start out by offsetting the bricks by .01 studs. 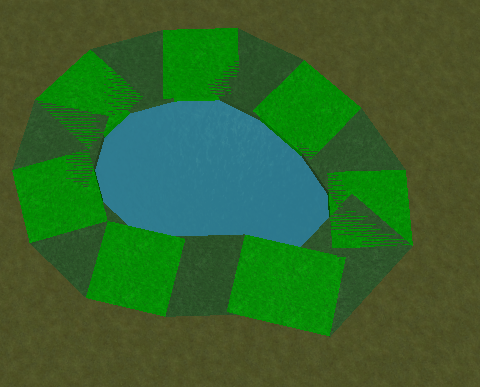 Well, it fixes up the terrain up close. 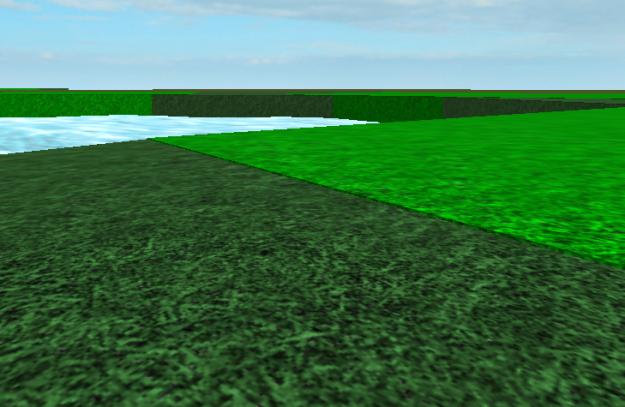 Gets rid of texture clipping up close

Creates a ledge where one brick ends

Clipping still visible from a distance 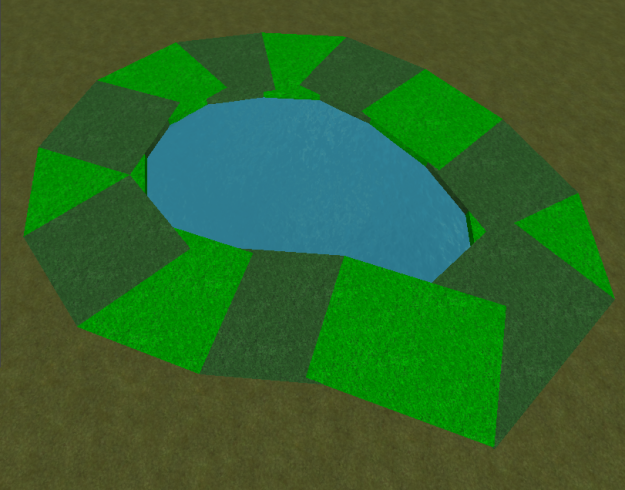 “Why not just union it”

True. You can just union it, but realistically the terrain in most places is too large for a single union. And if you split it up into two unions, it can still have problems where the two unions intersect. 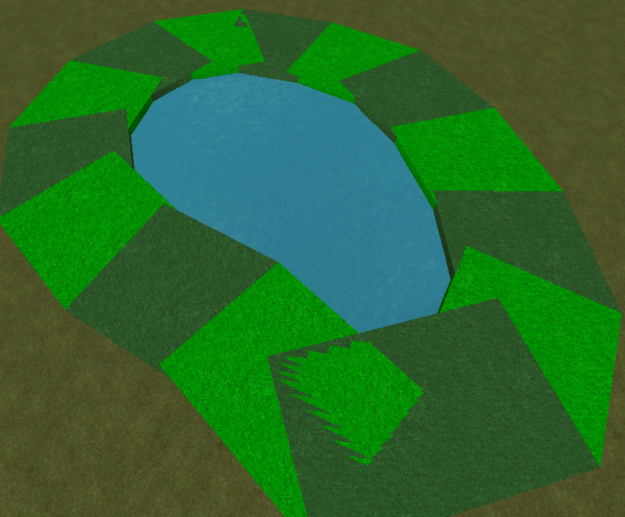 A simple way to fix it is to do something like this, where one union has the white bricks, the other red, to help negate the clipping where the unions meet. 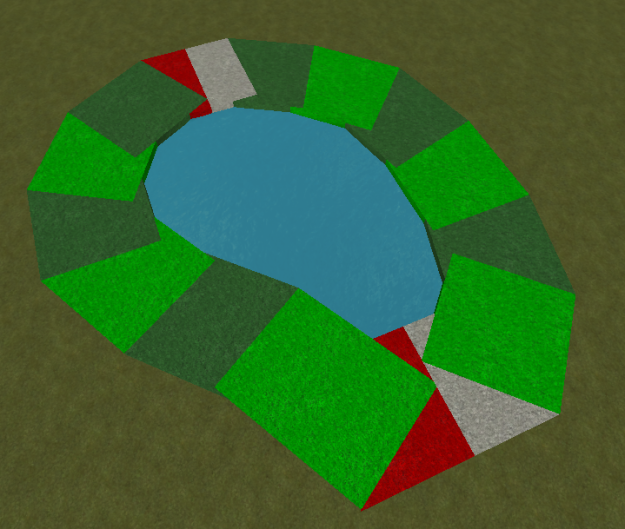 Need to adjust where two or three unions meet

Does not work with parts of different materials. 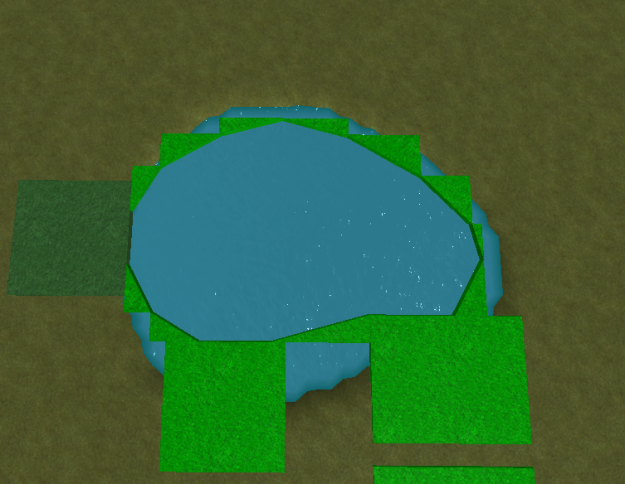 One other possible option is to make the terrain with wedges and fill it up with bricks. For example, I recreated the outline of the lake with wedges here. After you get the general shape together, you simple fill in the gaps with bricks. 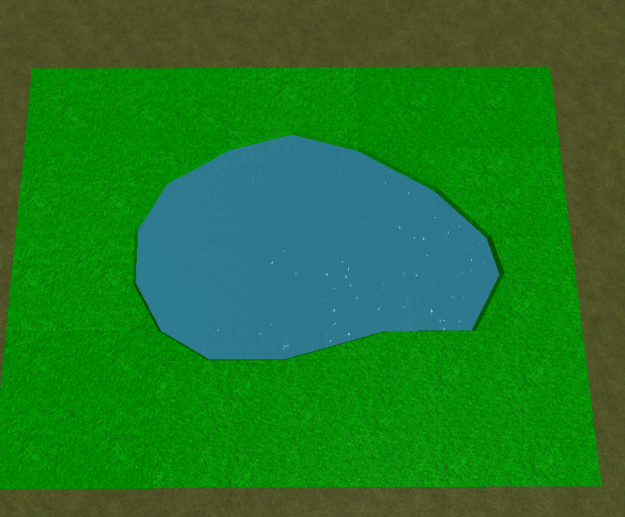 Can see where bricks meet with outlines enabled

More time consuming, and is very manual to convert from already made terrain

Those are some of the ways to prevent texture clipping in terrain. Of course, if you use smooth terrain, triangle terrain, or just have flat maps this shouldn’t be much of a problem. Next up is some more meaty advice with regards to building roads, paths, or sidewalks. Here is a basic 90 degree turn made of 7 bricks, each rotated at 15 degrees. As you can see, it has texture clipping. 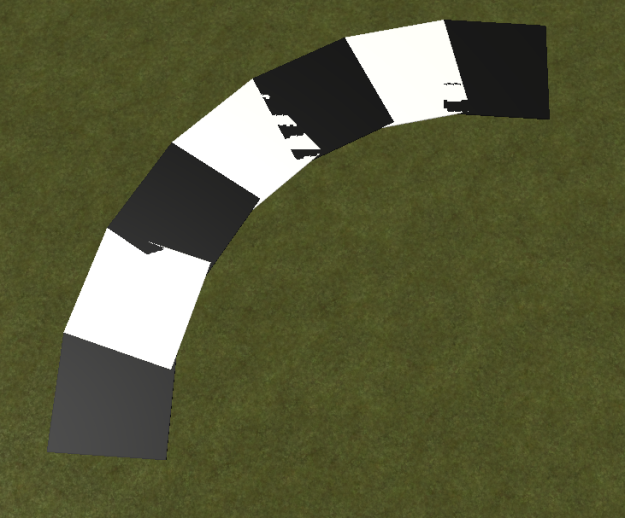 Starting with the basic offset trick, lets see the pros and cons of it. 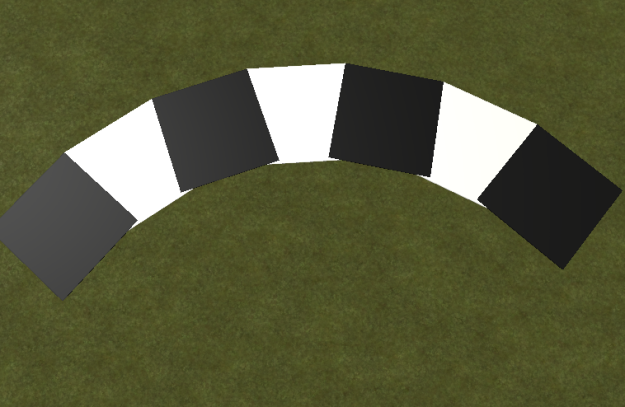 No texture clipping up close

Texture clipping from the distance

Now, I put “Has a ledge” 3 times. Why? Because for cars and other vehicles they can be upset by the ledges. For example, if the body is too close to the ground and they hit even a .01 stud ledge, they can stop since they, well, hit a ledge.

The next technique, like the offset, is the same as before: unioning the track. Not much to say. 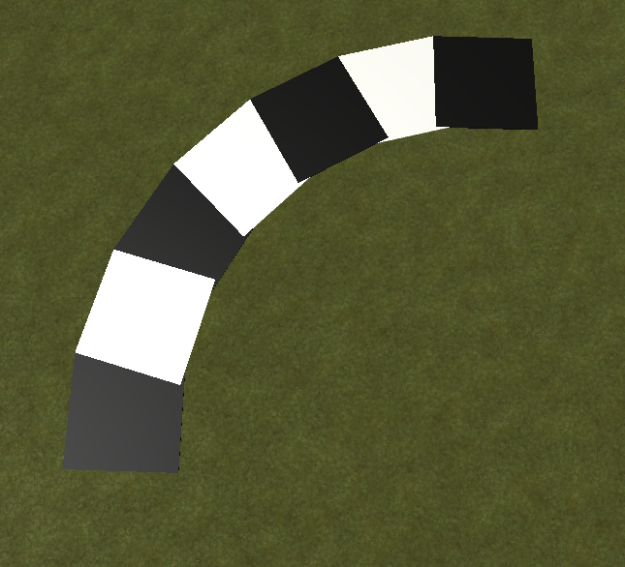 Unions may take longer to load

Physics geometry may be different.

Now, those are the regular techniques to fight texture clipping. Up next are two techniques that some people know, but most people ignore. The first one is basic: Rotate the road segments. What do I mean? Say this is a single track piece. 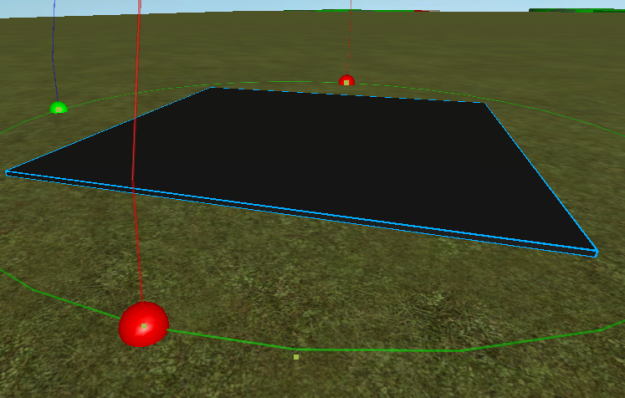 Rotate it so the inside of the curve dips down. In this example, I rotated it by .5 degrees. Also, please not if you use CmdUtl or one of its derivatives, you can select a bunch of the bricks at once and they should all rotate the same direction. 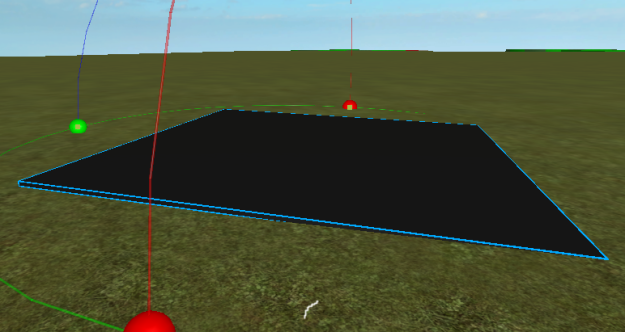 Then try to get it so the end of the track that was lifted up is now at ground level. I was using 20 stud squares, and it just worked out that if I lowed the brick by .1 studs the outer edge touched the flat ground. 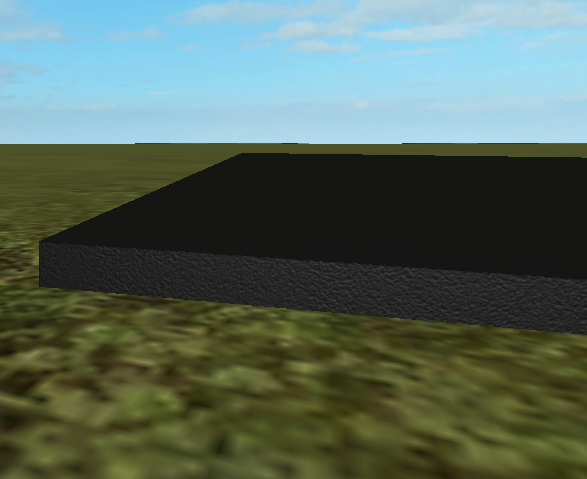 This is what the .5 rotation looks like: it got rid of most of the texture clipping. 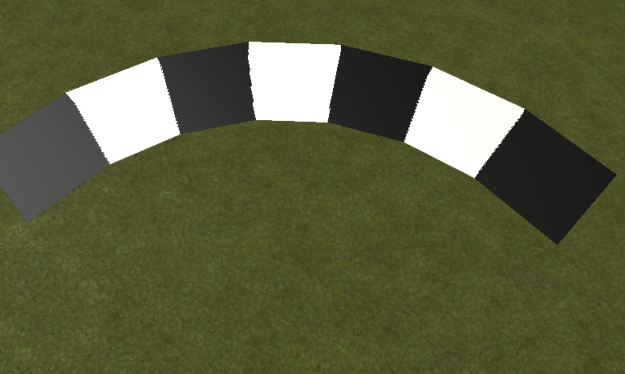 But lets say we bank the road 2 degrees rather than .5. Again, more of the clipping is gone. 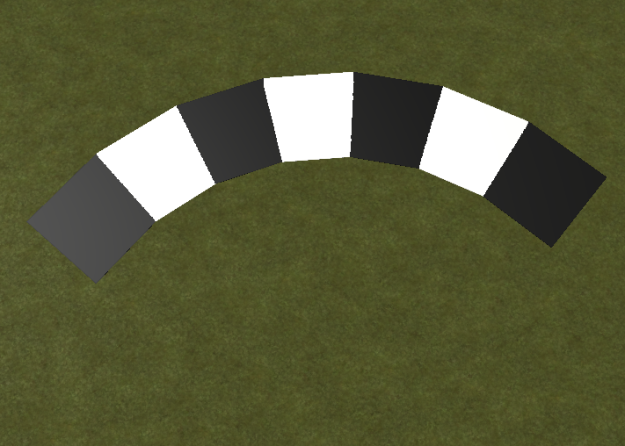 The only proglem is that on the side of the track that was lifted into the air there is now a .5 stud gap you need to fill in somehow, either with a wall or terrain.

Gets rid of a vast majority of the texture clipping

More realistic since most actual roads are banked slightly for drainage.

Does not get rid of all texture clipping

Leaves a gap under the road that needs to be filled in.

Adding banking to the road is a fairly old technique, dating back to 2009, and still works in some scenarios. However I have a better technique that can be used, and while is harder to learn can give you perfect roads without any texture clipping without using unions. How? First you need a brick surrounded on both sides, with the flat part of the wedge facing the middle bricks. 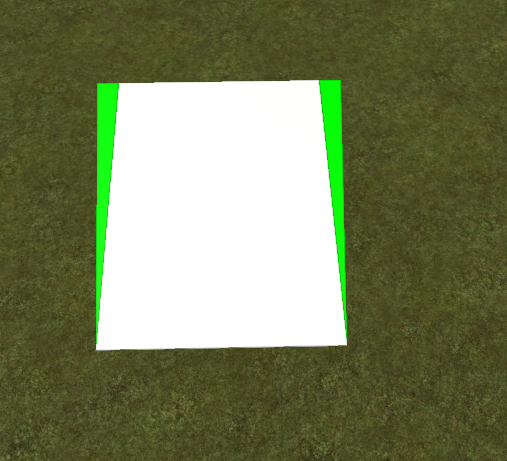 Step 2 is to duplicate the selection and move it relative to the object the length of the center brick. So if the white brick is 14 studs, move the new model over by 14 studs. Once you have the new model moved, using CmdUtl or another building tool select the “Select Edge” option. This lets you select a specific edge. Select the edge where the green and red wedge meet in this picture and rotate the new model. This should mean the two models touch only at a very small point. 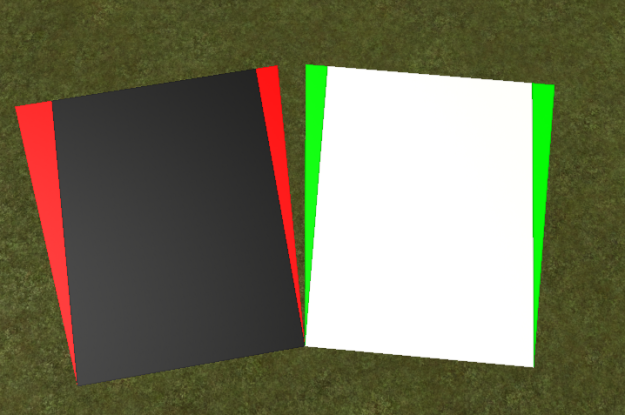 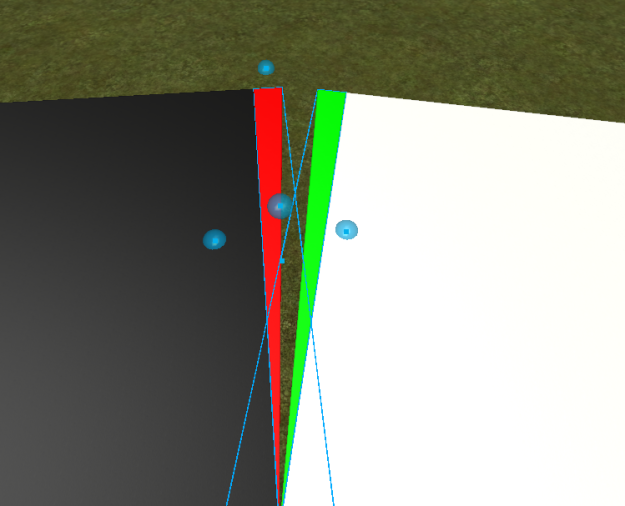 …And you’re done. One note is that you may need to resize it by a custom amount, such as .01 or .001 studs, to get the wedges at close to each other as possible. 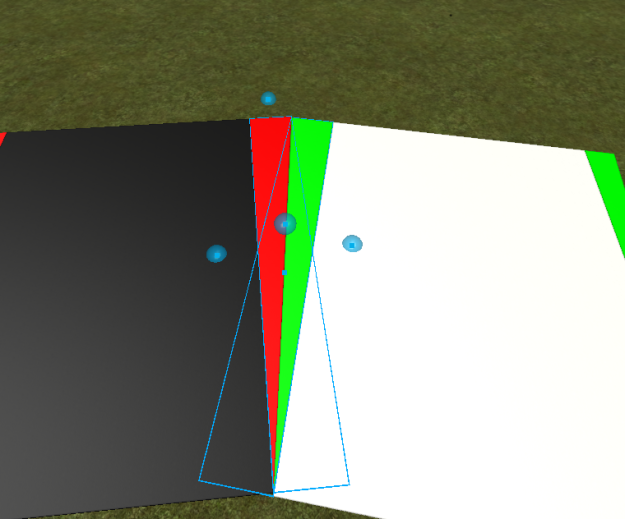 As you can see, if done correctly there should be no gap between the wedges and if there is any texture clipping, only a very, very small amount of it. 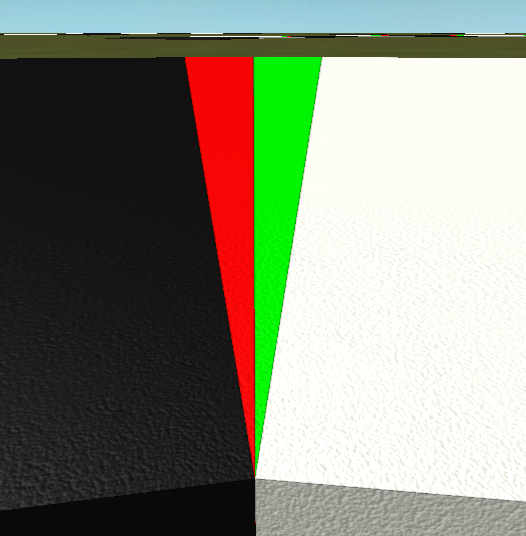 Then you repeat this a few times and it is done. Well, sort of repeat it. You see, if you are having are the segments rotated by the same time, you can do all the rotating steps first and you will end up with something like this. 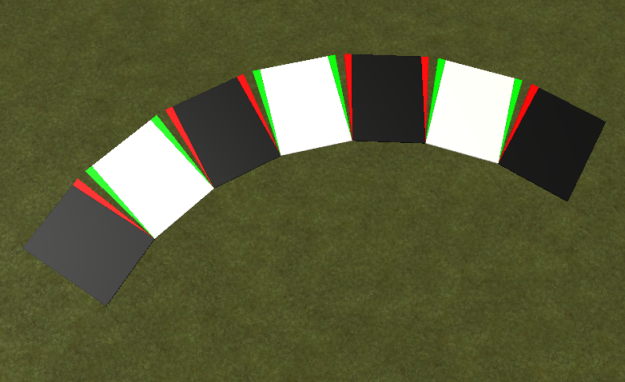 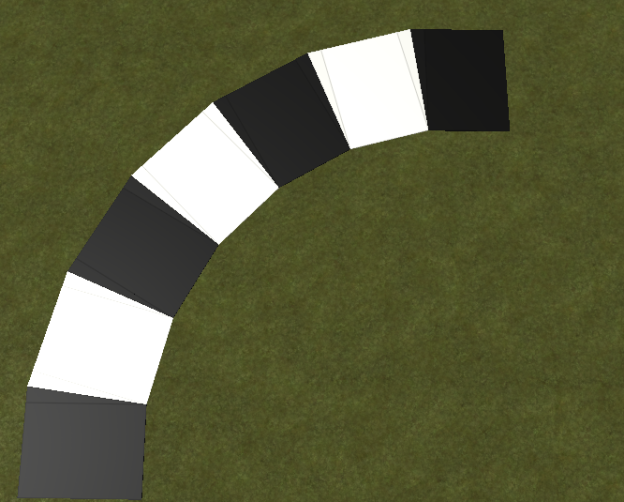 Need to remake part segments for different turns. Not hard, but can be challenging if you are new.