Hello mystical egg collectors of Roblox, WoodReviewer here for another part in my necessarily long and detailed at the 2018 Egg Hunt by Fifteam. Just Fifteam, not Fifteam games or anything, just Fifteam.

Enough on the random thoughts on the team name, lets move onto the actual review of the wood grain, this time, finally, at a map that isn’t Wonderland Grove, Merlin’s swamp. If you are curious how to get to it, just go to Wonderland Grove and hop through the portal, so you’ll have a chance to look at a ton of the improper wood grain throughout the map on your way here. The first issue with the wood grain I saw was this sign, which was about 20 or so studs away from the spawn point. Unlike most signs, the actual post for this sign was correct, probably because it was made out of corroded metal and not wood. However, the top face of the actual wooden sign part of the sign was incorrect, with wood grain that went from the front to back faces of the sign, not from one end to the other like on the front face of the sign. 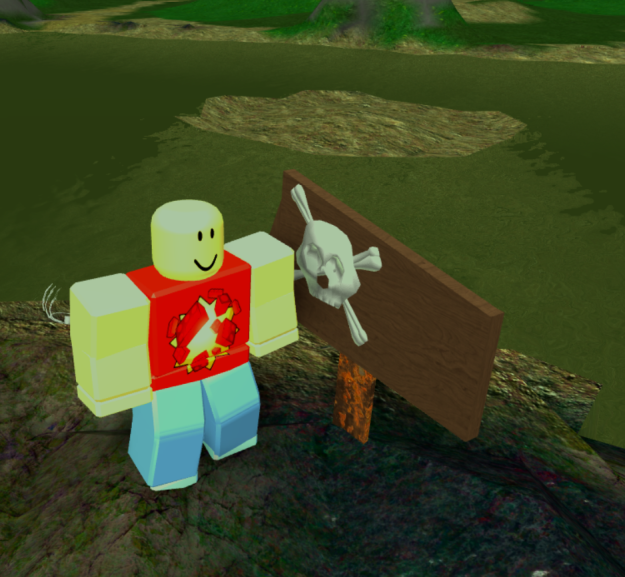 Next up on our adventure through this dangerous swamp with poisonous water is a bridge, which was also like 20 studs from spawn. Just in the opposite direction of the sign. However, considering the fact that said bridge was over deadly water that was constantly patrolled by killed alligators, the support structure for the bridge was not very good. Ignoring the ends of the wooden planks for now, the obvious issue is the supports that are holding up both cables that support the entirety of the bridge have improper wood grain. This means if too much force is put on them the improper wood grain will easily just snap and drop who/whatever is on the bridge into the water below.

About another 20 or so studs from the bridge is yet another example of improper wood grain.  The issue here was with the diagonal wooden board that has improper wood grain on the front face. The wood grain should go from the ground to the table top, like on the side face, but it doesn’t. This time it was much less significant, with it just being the side of a board holding up a useless table, but it still should be addressed.

Next up, still about 20 or so studs from the previous issue, was one of many jump platforms added around the map that probably were added before the final jump mechanics were finished since you can cross all the areas with these platforms with just the movement systems the game has in-place. The issue with these platforms is the posts under the platforms, which have horizontal wood grain instead of the correct vertical wood grain.

Moving on from within the first 50 or so studs near spawn, the next area I looked at was the totally not at all completely unrealistic and highly contrived puzzle to get a sword. the first issue in this area was the lever for the levers that drop different drawbridges.  The levers should have vertical wood grain, but don’t, instead have horizontal wood grain that will probably cause them to snap as soon as you put pressure on them.

The last stop on this much shorter journey of improper wood grain was inside of Merlin’s Tower. Aside for the walking book, most things here looked normal at first. However, under the talking book was some improper wood grain on the table. The front face nearest me should have had the wood grain go horizontally, connecting the table legs, but instead if goes vertical, which make no sense and just looks silly. 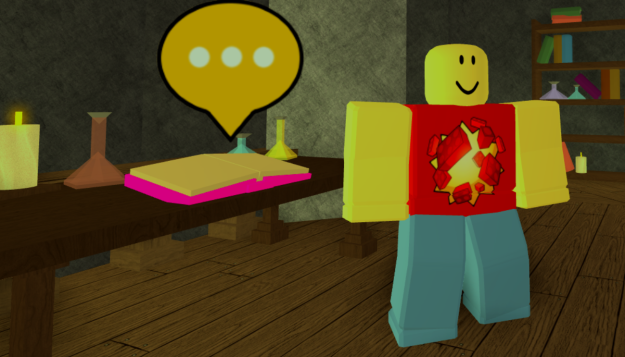 Oh, also the railings and table legs were bad, but I’ve already covered that, and will cover it more in future blog posts

The last issue for this sub-world of this world of a game was this bookshelf. The sides of the bookshelf should have vertical wood grain, but they don’t. They instead have the horizontal wood grain that everyone on Roblox seems to have agrees that all bookshelves should have.

And that was it. Yes, for this world this time, and entire (sub)-world reviewed in a single post that is only just slightly longer than my average review length. Obviously that means the game isn’t too good, but atleast this world was better than the previous world. And hopefully worse than the next world.

SPOILER: It is not worse than World 2, and World 2 will likely also require 2 posts. Maybe 3.