Hello there boys and girls, WoodReviewer here. Today I am going to be looking at Mad Murderer by Loleris. Now, I want to apologize in advance for this post. I believe that Murder and other similar games should be player with friends. However, I wasn’t able to play with any of my friends so I don’t have the best knowledge of the game. They all said something about needing a restraining order. Hopefully they can all get one so when I play one of the other Murder clones they can play with me when I get to them.

I was unsure if the map is suppose to be flooded.

Now, this review should come with a disclaimer. Normally I try and play games over the course of a day, preferable in one sitting, as so I don’t play across multiple updates. With the Mad Murderer, I was unable to do this for a few reason. The first was there is this annoying rap music(?) that constantly plays in the background, and about half the time there were several songs(?) playing at once and outside of muting ROBLOX, I couldn’t stop them. Muting a game with sound is bad, so I tried to find servers where this didn’t happen. And even in servers where only one song was playing, I could only play for about 10 minutes before my ears started to bleed. Next, some of the servers were exploited. In some servers the ground was randomly on fire, there was water randomly flooding half the map, and in some there were what I thought were exploiters who had a machine gun knife thrower thing that threw a bunch of knives really, really fast. I later found out that it was not an exploit, but rather an item that people could buy for 50,000 credits, or 10,000 R$. Overpowered knives, exploiters, and music aside, time for the real reason I had trouble staying in a game for extended period of time: The terrible wood grain.

This was what greeted me when I first loaded the game. The wood grain is wrong, which is sad since the main lobby is an empty box, with this center credits store and some other signs advertising stuff. Luckily, the other signs had proper wood grain.

…Actually, they don’t. Well, the top does, but not the side supports. Oh well, on to the actual games! 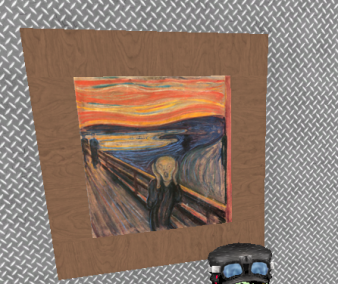 These are two paintings I found in a map. Not sure if they were the same map, I lost tract, but still in the game. Both are amazing. The Scream’s frame actually manages to get the wood grain wrong on all 4 sides. You could have just put a decal on a regular brick and got more sides correct. The second, a self-portrait of Van Gogh not only has the wrong wood grain on the vertical frames, but also a gap between the frame and the painting. 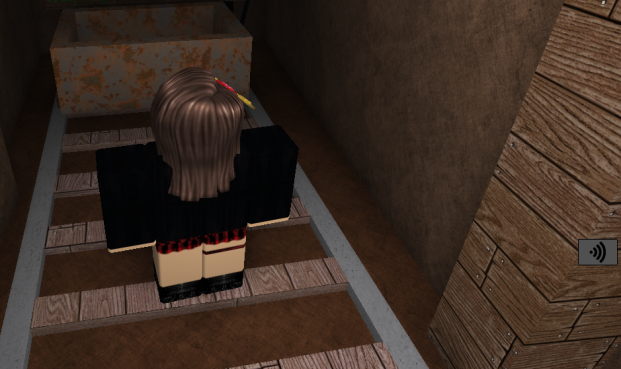 “WoodReviewer” you ask, “What about actual structural wood since paintings don’t actually put strain on wood.” Glad you asked. Here are some examples of load-bearing wooden planks. In the case of the ladder, mine shaft supports, and house porch, instead of the grain going bottom to top it goes left to right. In the case of the mine cart track, instead of using a piece of wood to keep the rails together the ties consist of pieces of wood laid next to each other and nailed into the ground. Bold move, but it didn’t pay off. 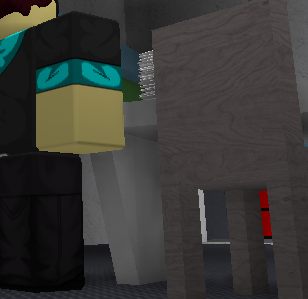 Moving onto smaller details than several tons of earth being held up by a some sticks stacked on each other, chair and table legs: how do they work? I’m fairly certain every review I will do will feature legs of some furniture so hold on for the ride.

Billy’s brother died when a ladder he was climbing on collapsed. He is now seeking revenge.

I could probably go on for hours in different Mad Murderer maps looking for more issues with wood grain, but it seems unnecessary. The wood grain isn’t the greatest. On par with the rest of the game, but still not good. I know I missed some maps, but it was clear that checking wood grain was not included in the vetting process for the maps. To continue pointing out issues with wood grain on more maps would be to throw several dozens knives at dead horse in a rapid fire manner because you had 10,000 R$ to spend. If you want to play  a Murder game with proper wood grain, I suggest playing the proper GMod version since the Source engine in general is good with wood grain, as are most of the pre-made assets that map makers use. The Mad Murderer does not get my approval.

1 thought on “Dying with Friends-Mad Murderer”