Hello fellow GollyGreg haters of Roblox, WoodReviewer here, and I really do hate GollyGreg. This isn’t some act or something, I really do hate him. Anyway, today I continue my review of Mountaineers. If you want to see who made it, check out part 1 of my review since like 80 people worked on it. So, where to begin with part two of this review? I think I should start where I left off with part one, at the main town area at the bottom of the mountain.

Usually when I to these large promo shots at the start of my reviews, they tend to be harmless beauty shots of a game. Images that I think are cool and I usually have nothing to criticize. That isn’t the case here, because the combined forces of GollyGreg, Beeism, and EBR are too much. This show shows just how bad the wood grain is; the 4 copies of the similar bridge with bad wood grain, the half dozen or so houses with the bad doors and windows, the dozens of light posts, the half dozen benches, and the few signs pointing players towards the next area. There are so many assets with bad wood grain here repeated so many times that I can’t help but point them all out.

But that’s the town. This part of the review is about moving on from the town, however before I leave the town I can’t help but point out the terrible wood grain on the roof of some buildings. It is just bad. That is all. Just really bad.

Anyway, the first task after you leave the town is to go fishing. This brings you to a fishing dock that has just terrible wood grain. I’m not even sure where to start with this; for starters, the vertical posts are wrong. They have horizontal wood grain, not vertical wood grain. Next up, the railings and main beams for the floor are incorrect, with wood grain that goes perpendicular to the length of the boards. That is odd here is that it is consistent with all the boards being incorrect, while usually for lazy builders only half of them beams are incorrect. This means that the builder wasn’t lazy enough to simply resize new parts to make the new railings, but was lazy enough to not fix the wood grain with a simple click of a texture flip plugin. 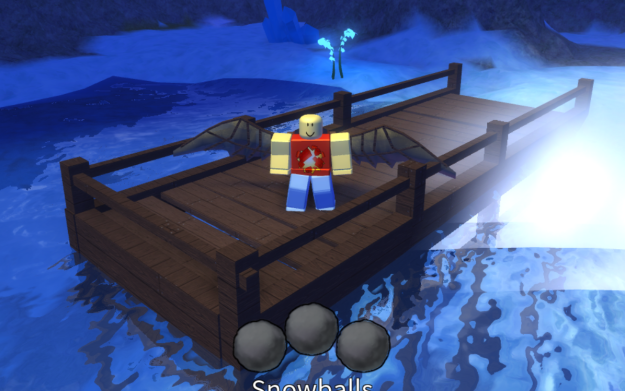 Continuing on through the mountain, there was another smaller bridge/fishing area. This was built in a similar fashion to the first one, only it was somehow worse. Yes, the railings, supporting posts, and support beams were all incorrect, a single support beam directly infront of my avatar had correct wood grain. But only the support beam had fixed wood grain; not the random piece underneath the bridge, nor the railing. Just that single piece of wood was fixed for whatever reason. This was annoying not just because most of the bridge was still incorrect, but it showed the builder just didn’t care at all and was just doing as they please.

Oh, and also the lamp post on the bridge had incorrect wood grain like the ones in the town.

Next up on my journey to the top of the mountain was the first of the many wooden fences I’d see along this journey. Unfortanetly, this one had improper wood grain on the top face of both the upper and lower railing. This was kind of expected, as it seems to be based on the same models as the bridges, but it still is not good. Plus, as an added bonus there was another different bridge and lamp post with improper wood grain in the background, if you were wondering if those assets would go away after a while. However, if you were worried about the next 2 blogs posts on this turning into a bash-a-thon of the same assets over and over, fear not, GollyGreg made different versions of the same assets, and many of them also have improper wood grain. Such as this bridge, which has supports for the railings that feature improper horizontal wood grain instead of the correct vertical wood grain.

Finally, for one last piece of bad wood grain for the day, take a look at the ice wall climbing area. Here, the vertical supports for the ice wall, like the failing posts above, have improper horizontal wood grain. This is very troubling as hard packed ice is surprisingly heavy and prone to collapsing, especially inside of a vertical shaft in an underground tunnel, so having these weak support beams in very, very dangerous to the stability of the mountain. If they fail due to bad wood grain, not only will the ice wall collapse, but the subsequent avalanche will likely take out the town and all the areas near it, which is not good unless you are like me and enjoy watching bad wood grain being destroyed.

And that is it for today’s blog post. Yes, I know it feels short compared to the first post, but just to put the context to how bad the wood grain is in this game, this part is the shortest image wise of any of the four parts of this review, but it is still longer than my entire review of the 2016 Egg Hunt, and that game was really not good. But don’t worry, there will be plenty of improper wood grain to bash GollyGreg for next time, maybe even with a compliment or two of some good areas.

Probably not any compliments, but miracles can happen. Maybe.