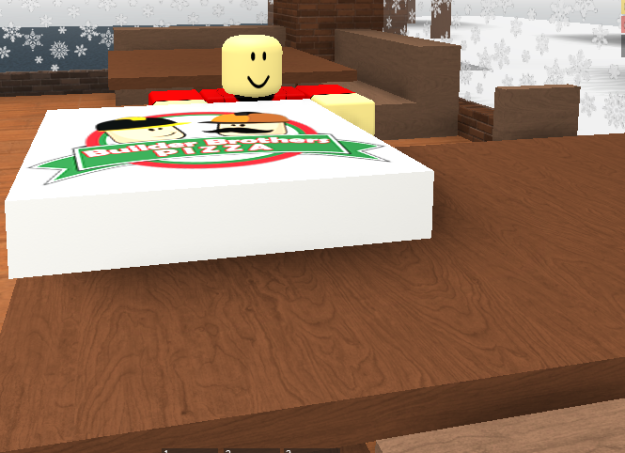 Hello guys. WoodReviewer here. Now that the introductions are over, its time to actually start annoying people. What a better way to start this by starting at the most popular place in ROBLOX’s history, Work at a Pizza Place by Dued1.

Now, are you hungry? Ready to eat some nice, hot pizza in a small town where oddly enough the only industry is a pizza place that everyone in the town works and everyone orders from but is still able to see a growth of wealth despite the fact there is no obvious source of new income for the town? Well, you should look down.

Oh hey this is how I add a caption

See anything off? Look closer; the vertical supports on the chairs are sideways. Also, the pizza despawned because I technically stole it. But here, in the entrance to the most visited building on ROBLOX, that 100 million people have walked through, is a textbook example if improper wood grain. Any lateral force and the chair legs will snap in half. Same for the table leg. Out of the millions upon millions of people who have been here, I am confident there have been atleast several, possibly even a few, other people who have noticed this glaring error in building.

The table is long left to right, but the wood grain goes forwards to back.

There was a pizza waiting to be delivered here. But then I stole it.

That is not the lone example of improper wood grain in the place. There tables that users can deliver pizzas from and the pizza making tables also have improper wood grain and are structurally weak. Fortunately, the pizza place is not run by savages so the tables are able to support the lighter and all around better New York style pizza. May God have mercy on people, and the tables, if the Chicago style “pizza” appears.

After being chased away by the manager for stealing all the pizzas in an attempt to get a good screenshot that I opened this blog with, I was forced to head outside. And there I saw something weird.

That is a tree. This tree is wrong. Now, I think we all know why it is wrong.  The tree is a deciduous tree as indicated by the round shape of the one in the background. That means the leave should have fallen off. But they haven’t since the tree’s leaves are covered with leaves. But that isn’t my issue. As for the wood grain, I don’t really care about it being sideways. ROBLOX lacks a proper bark texture for trees so no texture really looks like. Plus  bark is not a supporting member of the tree and follows a different pattern from the rest of the wood. My issue is when wood grain is used to represent wood grain; other uses of it I’m OK with.

Now that the unexpected approval of use of wood grain, LOOK AT THIS MAIL BOX. IT IS BAD. The pole supporting it has the wrong wood grain, and the diagonal support has bad wood grain on the side facing up.

There are other issues I could look at, such as some furniture in houses, other small paneling details near the pizza boxing area, but that that right there was the 550th word so far. While not the greatest built place on ROBLOX, Work at a Pizza Place is by far the most popular. Of all the wood in the place, 50% if incorrect, 40% is correct, and 10% isn’t used as wood. The issues would only take an hour at most to fix, and as the place that most new ROBLOX visitors see, they should be fixed.

1 thought on “Nom Nom Nom-Work at a Pizza Place”