Hello there fellow humans and Max the dog, WoodReviewer here. Apparently in the US it is now tax season. Now, based on the fact that the general age of ROBLOX players is so young and the fact that every year there are horror stories on the Dev forum of people who used DevEx but didn’t realize they have to pay taxes despite the fact they got sent a tax form by ROBLOX, lets go over the basics: You make money, based on how much money you make you send money to the government, and all should be good. However, sometimes the government does an audit in which they go through you taxes to make sure you paid as much as you should. If you are paying your taxes properly this isn’t an issue, but if you aren’t it is.And if you aren’t, you should avoid doing everything possible to get an audit. This includes not bragging on Facebook at how you didn’t pay your taxes, driving around in a Bugatti Veyron with a license plate TXEVDR while claiming you make $10,000 a year, or Tweeting at the IRS saying that they should audit you to find how much money you haven’t been paying.

Lets start with the chair.The vertical supports on the legs and back are the wrong way. Next up is the shelf. The back and sides both have bad wood grain. Additionally, the legs have bad wood grain. The fact the furniture is bad is bad if you’re on a boat and it’s going fast and you’ve got a nautical themed pashmina afghan. And sudden movements and the legs will snap and off into the water you go. For those keep score at home, that is 6 bad pieces of wood grain so far. Number 7 comes from the boxes. As you can see on the two sides with the longer planks, the wood grain goes the wrong way. Because this is the main building block in-game, it is an obvious structural weakness. On the plus side maybe the planks will glitch out after they snap and you’ll get to the moon somehow. 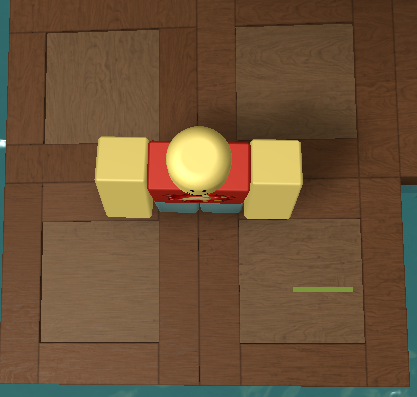 Congrats to those who correctly saw all 7 flaws from the first picture. Here is another that wasn’t in it.

See it? How about now.

The horizontal beam was so close to being correct. The main face was right, but the one facing up was wrong.

There may be more issues in Whatever Floats You Boat, but I only got to level 8 and was unable to progress fast enough to see the late game items. Some may be correct, others may not. Overall what I saw was pretty poor. Based on Quenty’s other places probably incorrect. But those are for another day, but hopefully he fixes them before I need to do another audit.